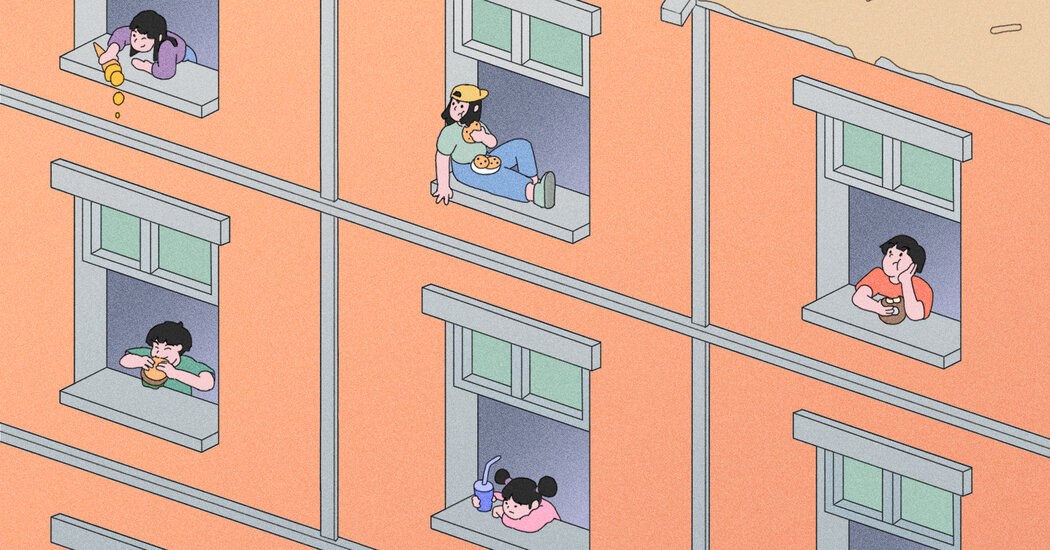 But while it has been possible to identify ways that schools can help prevent B.M.I. increases, it has been harder to figure out how to replicate those conditions when classes aren’t in session. For example, only about three million of the 22 million children who receive free or reduced-price lunch during the school year get the meals they’re eligible for over the summer. Those meals are typically more balanced nutritionally than the cheaper, calorie-dense fare that families resort to when food is scarce. Inconsistent access to food can also cause physiological changes that heighten the risk of obesity; school closures and job losses during the pandemic greatly increased the number of children without a stable source of nutrition. In June 2020, more than 27 percent of U.S. households with children were experiencing food insecurity; in about two-thirds of them, there was evidence that the children, in addition to adults, weren’t getting enough to eat — more than 5.5 times the number who reported those circumstances in all of 2018, according to the Brookings Institution. In addition, many families with sufficient resources were buying more ultraprocessed, shelf-stable foods for comfort and in preparation for possible lockdowns or supply shortages.

The crisis did force federal, state and local agencies to improvise novel ways of getting more balanced meals to children outside a school setting. To limit infection risk and reach more students, for instance, the U.S.D.A. offered waivers to what is known as its “congregant feeding” requirement that children eat on-site. This allowed caregivers to pick up multiple days’ worth of meals; some districts converted school buses running along their regular routes into a food-delivery service. The agency also made all children eligible for free lunch through September 2021, eliminating the paperwork required to qualify and the stigma that often comes with it, says Eliza Kinsey, a professor of epidemiology at the Mailman School of Public Health and an author of the Obesity paper. Such “program flexibility,” she points out, “could be applied in other, non-Covid contexts,” such as during the summer or for other disruptions like hurricane and wildfire closures.

It stands to reason that broadening access to nutritious foods would help prevent childhood obesity going forward. But schools also play a central role in the collection of nationally representative health data for children, a process that has been disrupted by school closures. We don’t know yet if the nearly 2 percentage point increase observed in the Philadelphia area will be similar across the country — or how much expanded feeding programs have mitigated the many and varied risk factors for obesity imposed by the pandemic.

Still, other pediatric hospital networks have reported worrying increases not just in obesity but also in the conditions that go with it. In a study published in April in the journal Diabetes Care, researchers noted a sharp increase in 2020, compared with previous years, of the number of children who showed up at Children’s Hospital Los Angeles with a severe form of new-onset Type 2 diabetes called diabetic ketoacidosis. That might be because children were eating poorer-​quality food and moving less, according to the lead author, Lily Chao, interim medical diabetes director at the hospital. It could also be that worries about the coronavirus induced families to delay seeking treatment for their children’s symptoms until they were in diabetic ketoacidosis.

A better understanding of how and why the pandemic affected children — not just physically but also emotionally and academically — would improve the ability of pediatricians, parents and policymakers to facilitate their recovery. Unfortunately, what is clear is that for children whose B.M.I. increased, “there are no magic bullets,” Black says. And, she adds, “it’s not healthy for kids to think about losing weight.” Rather than try to undo a past B.M.I. increase, a better strategy is to try to slow future ones and establish healthy habits. There is some good news in the fact that children tend to experience a growth spurt during puberty, says Risa Wolf, a pediatric endocrinologist at the Johns Hopkins Hospital; this can enable them to redistribute added weight on a taller frame. Wolf suggests parents focus on trying to build physical activity into their kids’ daily routine; the C.D.C. recommends 60 minutes for school-age children. And cutting fruit juice and soda from children’s diets is an easy way to significantly reduce sugar and calorie intake, Chao says.

‘X’ Marks the Spot: Officials Map a Route Out of the Pandemic

Mourning Families Seek Solace From the ‘Grief Purgatory’ of Covid-19

‘X’ Marks the Spot: Officials Map a Route Out of the Pandemic

Mourning Families Seek Solace From the ‘Grief Purgatory’ of Covid-19